Searching For A Laptop

I decided since my travel time is so long, I should buy a laptop so that I can get some stuff done then. After checking prices and stores for a few weeks, I found a store that sold used laptops for reasonable prices. The one I liked was missing the charger, so I had to wait two weeks for it to come in (was told it would be 3 days). By then I had spent the money elsewhere so didn’t get it.

This weekend I was Cash Convertors looking for electronic games and saw a Toshiba laptop for $200 – Pentium II, but it’s enough for my purpose. It was advertised with a 10 gig hard drive, but when I got it home it was only 4 gig. I should have checked the size while I was in the store. I also found out that the battery is dead. It works fine with the charger plugged in, but defeats my purpose for a laptop. According to the Internet, a new battery for that model is $150 US.

Now my dilemma is should I pay for a battery? Who knows how long the machine will last? The warranty is only 30 days, so I don’t want the screen to go after paying more money. Only problem is that I can only get an exchange, no refund – so I may be getting stuff from there for a very long time before I use up my credit – unless somehow they have a working model at one of their other stores.

The other thing I learned is that when you get rid of a computer, make sure you take your information off it. This was a company machine and still had budget reports, specialty company software, etc. Unless this guy was fired and did it on purpose, I don’t know what he was thinking!

Anyway, back to the searching for a good deal. I leased my Dell PC and later bought it and lately I’ve been thinking about doing the same with a laptop. Do I want to pay for two years, or do I not? On the plus side, I could right it off every month on my taxes – hmm. 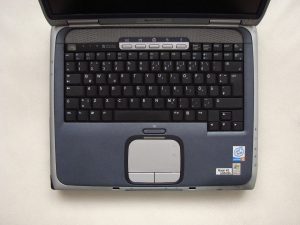 Well, I decided to return the second hand laptop I bought. Thought it was such a great deal, but I couldn’t get the battery to hold a charge and I didn’t want to buy another one. Plus I realized how heavy it was to carry.

I am slowly looking for a good laptop this time and want to make sure the battery lasts for a while and it weighs under 5 pounds. Otherwise I will not want to carry it on the bus with me, which is my main reason for wanting one. My commute is at least one hour, more when the weather gets bad and I hate to waste the time sleeping.

Confessions of an Email Addict