I do a lot of reading and gathering stories, and I’m afraid that this time I forgot to write down the original source so I can give proper credit. This story has two parts and I’ll finish off with one of my own.

Prefer to read?  Here ya go:

While a man was driving down a country road, he lost control of his car and wound up in the ditch. He walked to the closest farmhouse and asked for help pulling the car out. The farmer agreed to hitch up his old mule Dusty and pull the farmer out. But the first time the farmer cracked his whip, he said “Pull Buck, pull” and nothing happened. Again he cracked the whip and yelled “Pull, Clyde, pull” and still nothing happened. The third time, the farmer called “pull, Dusty, pull” and Dusty pulled until the car was finally out of the ditch.

When the man thanked the farmer, he asked why if the mule’s name was Dusty, did he say ‘Pull, Buck’ and ‘Pull, Clyde’. The farmer smiled and explained that since Dusty was old and almost blind, he didn’t have much confidence. If Dusty thought he had to do all the work himself, he would probably have given up and not even tried.

Sometimes we’re like Dusty. We see the mountains God is calling us to climb and we give up even before we start. But that wasn’t the case with Wilma Rudolph.

Wilma was the twentieth of twenty-two children and because of a premature birth, was not expected to live. The doctors were wrong, but when Wilma was four years old, she got pneumonia and scarlet fever, which left her with a paralyzed left leg. At the age of nine, Wilma removed the metal leg brace she had depended on for five years and began walking without it. By thirteen, she had developed a rhythmic walk, which doctors said was a miracle.

That same year, Wilma decided she wanted to compete in races. She entered her first race and came in last. For the next three years, she came in last in every race she entered. But Wilma kept running until the day came that she won a race. Eventually, the little girl who was not supposed to live and then who was not supposed to be able to walk would win three Olympic gold medals in track events.

My mother was born with a heart defect and throughout her childhood was never allowed to participate in sports or be very active. In fact, the doctor told my grandmother that mom wouldn’t live past the age of 18. Two years ago, my mother did pass away, in her early 90’s. She regretted missing out on so much as a child because of other people’s thoughts and as an adult led a full and energetic life, including horseback riding and curling, as well as raising six children. (that’s her in the photo)

Imagine if mom had given up on life all those years ago. She may even have decided not to ever marry or have a family. And I wouldn’t be here to encourage you never to give up – no matter how things may seem, no matter what anyone says, or what may stand in your way. Go out today and climb those mountains!

Have a great day! 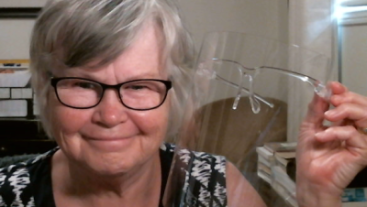